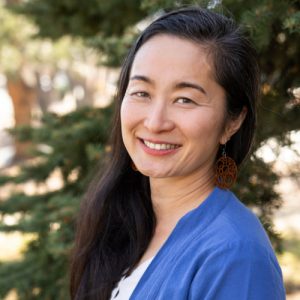 Originally from Japan, Ayano is a bilingual (Japanese/English) Psychedelic Guide who has completed advanced training and certification in Mindfulness-Based Psychedelic Therapy with the Center for Medicinal Mindfulness. Ayano is a yoga therapist certified through the International Association of Yoga Therapy and by Phoenix Rising School of Yoga Therapy. She is also a yoga teacher, trained through Kripalu and Phoenix Rising, with experience in Yin Yoga. In 2020, Ayano was certified as a practitioner of Compassionate Inquiry, a trauma-informed psychotherapeutic approach developed by Dr. Gabor Maté. She is currently pursuing a Masters of Science in the Consciousness, Spirituality and Transpersonal Psychology programme through Alef Trust, accredited by Liverpool John Moores University in the UK, where she explores possibilities of healing in the holotropic state of consciousness.

Ayano is passionate about facilitating space for people to explore their inner wisdom and truth through embodied awareness. She trusts that our bodies carry deep insights about ourselves and the world and that healing (as in movement toward wholeness) is available for everyone.

Ayano’s own healing journey started in her twenties when she realized how her own body and mind were significantly disconnected. Through the approaches of yoga and yoga therapy, Ayano realized how much she had been ignoring the voices of her body and different parts of herself, which inspired her to start exploring ways to heal her emotional and spiritual parts. Psychedelic work offered her another layer of insights and healing, which she is deeply appreciative of.

Ayano grew up in multiple places in the world and is fully bilingual in Japanese as well as English. She was not raised religiously, however, with her Japanese background she appreciates Buddhist philosophies, both dualistic and non-dualistic approaches of Vedic traditions, and animistic views of Japanese Shintoism. She identifies herself as an ally of marginalized people including the BIPOC and LGBTQ+ population. In her free time, Ayano enjoys being out in nature (rock climbing, hiking), engaging in her creativity (painting, spinning yarn), and spending time with her family (singing, playing music, and just enjoying each other’s company).

I feel particularly called to support: